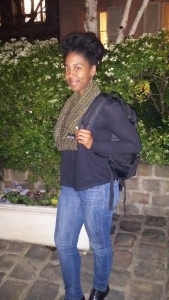 The story of ‘j’aime et beauté’ you might expect transpired more like a night of travesty in the city of love. I was recalling with a friend how Rondel and I spent our first night in Paris. There was more laughing (on both of our parts) than the generalized ‘OMG, how romantic!’ or ‘Tell me more!’ In fact, we couldn’t wait for the night to come to a close to start off a fresh new day. Here’s the (not so) short version…

We fly in from Milan to Paris,

catch the subway train to the Luxembourg stop, which we believe is closest to our Airbnb. We file out through people, emerging onto the surface of the Parisian night without a clue of where we actually were. Tried deciphering some street signs, made half a plan and headed in a direction. We turn the corner from the Luxembourg station soaking in the amazing french architecture, cafes, pedestrians and shops and an amazing view of the Pantheon straight ahead – the first Pantheon we’ve seen this trip; noteworthy, right? We could feel the cultural ambiance, we knew we were not in Kansas anymore. We had arrived………..almost.

We walked, we admired, and walked a bit longer, turned right instead of left, then turned left instead of right and found ourselves at a pretty pedestrian friendly intersection. We were in the world famous Latin Quarter. We chose the Latin Quarter because it was a walkable neighborhood and central to everything we wanted to get to. It was saturated with cafes, restaurants and bustling Parisians. It’s probably 8pm. We confer with the map (as we had several times already) to determine where we were. The map said it really wasn’t that far from the station…so why couldn’t we find it? Mind you, we don’t dare to reach out to one of the many native passersby because we don’t speak a lick of French, and who wants to be a dumb American anyway, right? Armed with our pride and fierce determination we stare blankly at the map again, a then a little longer before deciding to move our feet again. Should we go, west? East? North? Look, all I know is we walked up the street and there it was! The Airbnb? No(!) ,the street that the Airbnb was on! We were warm! In fact, we were hot without even knowing it – we’d walked the street already, passed right by the door the first time. We turn up the street and the first door we see matches the address.

Jesus, thank you. We go to open the double door and it’s locked… Looks like you actually need a building code to get in. But our host neglected to tell us this part; or so we thought. So we scramble. Having printed off all travel correspondence (travel tip 1: don’t rely on tech) Rondel starts to look through the emails in case we missed this building code number. Desperation is trying to settle in. What we knew for sure was the floor number and the fact that the key was under the mat outside of our host’s door. But alas, an obstacle. The building code number was not included in the confirmation. But wait! Someone walked out!  -We caught the door before it closed and went in. It led straight into a very small vestibule with another set of double doors leading to the lift and other apartments. You guessed it, we needed another code to get through this second set of doors too. We drop our bags and try entering random numbers to get in or select the correct person’s name to be let in (although we knew he was out of town). We would try anything! As we tried punch in anything the lights turned off in the lobby. The lights. Turned off. (dramatic pause) We’re in the dark now, moving around randomly because maybe its a motion detection system. That didn’t work. Well that’s that, time to take a seat in the darkness. Illuminate our thoughts with smart phones, hoping that someone will come through. Some time passes and a guy walks in! We rush to him and explain our whole situation, we show him the correspondence we have and we mention our host’s name, François. The guy says, “I’m François!” Did we just get lucky? He continued, “Yes, I’m François but not the one you think. Although, we are neighbors!” “So you’ll let us in?” we say excitedly. “No I can’t, I don’t know. No.”, he responded

Okay. We watch him go through that second set of doors and unto the lift. Let’s fast forward. We’re tired of waiting at this point so we decide that Rondel will go outside and search for wifi and I’ll stay in the dark hallway hoping for light (later we realized there was a button in the hallway that turns on the light temporarily…). He comes back 20ish minutes later to no avail. We both decide to embark, together, on a hunt for a nearby hotel/hostel with internet access to try communicating with our host. We find a hotel, where we are warmly received, they are so inviting, we use their phone and internet and wait around a bit for a response. No response. I think it’s time to accept the notion that if we don’t want to remain stranded tonight we must seek other lodging. This nice hotel was booked though. But before we accept this alternate reality, we decide to give our airbnb location another time sensitive try. We trek back over, someone leaves as we arrive so we calmly walk into the hallway to wait again. About 10min pass and a woman walks into the building. We explain our whole story before like we did with the doppelganger François. She says she’ll let us in! Mercy! We profusely thank her and follow her to the lift. Rondel and I get on the lift, it’s pretty tight for the 2 of us.

The lady gets on behind us and there is no turning room whatsoever. I’m relishing my first lift experience here. It was tight. She gets off on the 5th floor and we go to the 6th. We guess which apartment is our hosts, because there’s a hall of apartments up here. We figure it out, mainly because there’s mail with our host’s name sitting outside the door. Key is under the mat like he said and we get inside. We’ve been waiting for this moment, to sit down, to unwind and to try and plan the last bit of this evening. We read the note that François left, locate the wifi password but can’t decipher it…there’s a few characters that are ambiguous. Needless to say, because I’m tiring of typing, we find the correct code – the French numerical 1 looks a bit fancy. François sends a response (after Rondel sent another email to him telling him we are in his apt); his response reads “Sorry, I  forgot the codes”. – pretty important pieces of information. All is well that ends well though. We settle in, we’re hungry, we decide to walk around to find food. From what we see, this part of Paris, the Latin Quarter, is pretty beautiful and lively at night. The neighborhood is like a cluster of side and back streets with little boutiques and bars and 20 somethings gathered together along the cobbled walkways. We toured the Latin Quarter maze with restaurants lined on its banks. We found it intriguing that, all of the restaurants had outdoor seating that faced the street. Obviously, Paris was a spectator city. We could pick up the chatter from conversations that small groups were having in this little area. Couples sitting together sipping wine, large groups laughing….. We found food at a nearby restaurant, I can’t even remember what we had but it wasn’t memorable. Neither of us were impressed with our first Parisian meal. They didn’t even have wine. What a bust. We finish our meal, walk around and just enjoy the scene. Thankful, relieved, and happy to be here; we had arrived.

World wide lover of who and what and where, however we can. View more posts